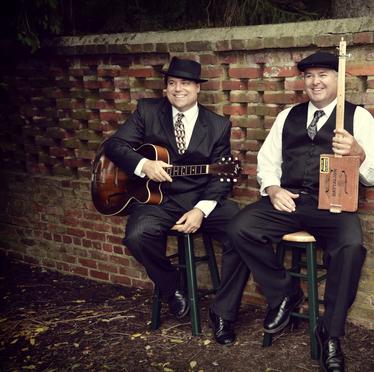 Covered Bridge is a musical partnership between two friends, Kevin Nemith and Joey Fulkerson. Kevin and Joey have known each other since high school and both have been musicians for over 40 years.

Joey has played professionally all his adult life, touring all over the world with Chubby Checker. Joey is a versatile guitarist and songwriter who has recorded in Nashville and has been the guest guitarist for numerous musical projects. Joey is also part of the Nothin But Trouble Blues band which plays regionally and has two albums under their belt.  Joey has his own business Fulkerson Music Services LLC  fulkersonmusicservices.com. He does instrument repairs and gives lessons serving the Delmarva area. He is also known regionally for his solo guitar and vocal performances where he does an amazing solo acoustic show.

Kevin has been involved with numerous singing groups and church choral groups over the last thirty years. He has also performed as a soloist at numerous weddings in the region and as a guest musician for various bands. Along with the Covered Bridge project, Kevin writes songs, performs as a solo guitarist / vocalist, & produces  along with Joey all of the Covered Bridge recordings.  Kevin is  President of  CNC Insurance Associates/ Hilb Group and works as a commercial insurance broker and  Risk Manager.

Covered Bridge music project came together when the two talked at their 25th class reunion to bring 20  years of written music to life. The two plan to record 10 albums and are currently recording and working on their 8th record.  Almost all of the instrumentation, vocals, and production on the records are done by Kevin and Joey, but they will involve guest musicians as the projects dictate. Also many of the songs they will record are available for licensing, for production, and for media uses.

Covered Bridge will also give back by donating a percentage of the sales of their music endeavors to local charities and community needs.